Local musicians to battle it out for Oban Live slot

Four music acts from Oban are gearing up to battle it out for a slot at Argyll’s biggest live music concert Oban Live this June.

4Below, S-Mac, Crackin’ Craic and The Argyll Ceilidh Trail are local category finalists in the event’s Scottish Sea Farms Unsigned Oban Live 2019 competition. The public will decide the winner via an online voting poll which opened April 1 and closes 12pm, April 22.

As part of each act’s campaign for votes, the musicians will showcase their talents at a local category Shortlist Night at The View in George Street Oban on Thursday April 18, 7pm to 9pm. 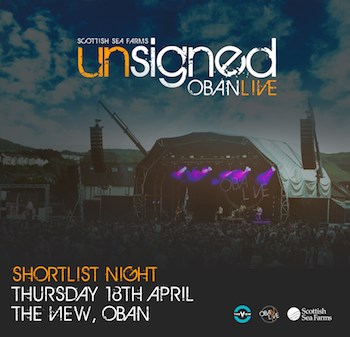 Tickets are £3 and will be available on the door. The public are invited along to support their favourite act and the evening is expected to be a good opportunity for those still undecided to watch the bands perform live.

As well their name on the Oban Live 2019 line-up, the winners will also win £300 towards expenses and a slot at the Official Oban Live After Party at The View, Oban.

The finalists make up an eclectic list of musical genres from Scottish hip hop to trad to alternative rock.

The Argyll Cèilidh Trail are an 8 piece band composed of Argyll’s finest young traditional musicians and is organised by Oban based charity Fèis Latharna.

4Below is the first solo alternative rock music project of Andy Bruce who’s unique act and music is generated from his bass guitar both live and on recordings, delivering a big rock sound.

Crackin’ Craic are a local band from Oban and have been performing for over four years. They released their debut album last year which received a great response from fans and supporters. They are currently working on new music.

Solo rapper Stewart McAllister, aka S-MAC, has a unique style of Scottish hip hop with plans to bring a different vibe to the Oban Live stage if he wins. He regularly performs in Oban alongside Oban Live’s 2017 Unsigned winners K9Kev & Rory O’B.

This is the first year Oban Live has two winning slots available, opening the competition up to greater Scotland as well. Battling it out online for votes in their new Scotland wide category are November Lights (Monifieth), Lisa Kowalski (Paisley), The Youth and Young (Fife), Banshee (Renfrew) and DMS (Edinburgh).